The Descendents are Pizzalicious

Here is a good one from Pizzalicious contributor, Harris Middleton(Saikyo78) 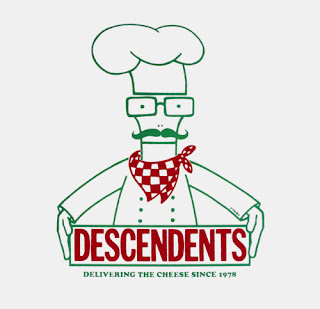 Posted by Lauren Vincelli at 10:48 AM 2 comments: Links to this post 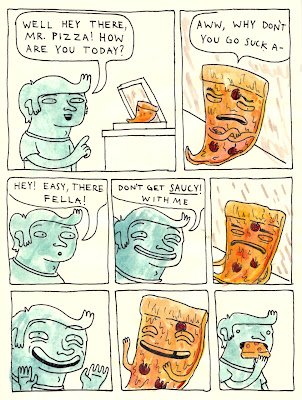 Posted by Lauren Vincelli at 3:53 AM No comments: Links to this post

Yesterday I posted a video about degreasing pizza. That was just one method. Scott of Scott's Pizza Tours also muses on the best way to degrease a slice. I imagine he has seen a few degreasers in his pizza touring so surely he must know the way...

Posted by Lauren Vincelli at 10:28 AM No comments: Links to this post

How to degrease pizza

Just another way to reduce your consumption of pizza grease...

Posted by Lauren Vincelli at 10:38 PM No comments: Links to this post

Degreasing Pizza or Lose Weight! Eat (only) Pizza (for 15 years)!

My friend Will recently posted this video on Facebook. In it this dude talks about how he has only eaten pizza for the last 15 years and suspects he has lost weight (>30lbs) just from blotting the grease off his pizza. He explains, in detail, this amazing weight loss technique! Always consult a pizza doctor before implementing any pizza weight loss techniques.

from the original poster ulillillia

"For about 15 years, I've been degreasing pizza. That is, I soak up the grease on pizzas before I even start eating them. From my experiences, this is an effective weight loss technique and it works on many things. For a McDonald's hamburger (the really greasy ones, from what I remember before 2004, the last time I had meat), simply order the burger with all the components separate (the lettuce, tomatoes, ketchup, mustard, cheese, etc.). For a pizza, it's much easier... until you start adding certain toppings like spices, parmasean (sp. ?), or garlic as they tend to reduced. This can be done with French fries, steaks, roasts, and almost any meat or deep-fried foods (donuts anyone?), though best done before any toppings are added like salt, pepper, spices, powdered sugar, and other such things. This will not work, however, with drinks or other water-rich foods and foods with very little fat in the first place.

Doing this is actually very easy, though mastering it (preventing problems) takes some time. First, grab a few napkins or paper towels (Bounty and Brawny work very well) and begin dabbing the pizza. The more liquidy the cheese is, the more likely it is to stick to the napkin or paper towel which requires very short dabs or a brief cooling before starting. For best results, start when warm and go fast. You won't get everything, but as this video shows, that first run alone easily has about 20 grams of fat (estimated). Further runs could remove about 40 grams of fat out of the 65 total.

Each gram of fat is 9 calories (technically, it's kilocalories). Thus, with 40 grams of fat removed, that's 360 calories you won't be taking in. 453.6 grams of fat, 1 pound, is 4082.4 calories so that right there is already a tenth of a pound removed. Of course, some of that weight may actually be water and more yet may be spices, and sauce being taken out. I don't have any equipment to test what exactly I'm soaking up. Thus, I have a request for the Mythbusters. I would love to know if this technique I've used for 15 years (if not a little more) is an effective weight loss technique. 40 grams may not seem like much, but, carry this out over a whole month, just 30 days, and that's easily 1200 grams or about 2 pounds and 10 2/3 ounces (2.65 pounds) not being put in your body. Obviously, knowing the chemical make up of the paper towel before the degreasing is important as a control. The chemical makeup of the paper towel after degreasing would be the main test. Subsequent tests would also be interesting to know. It gets less effective for each subsequent one and with a pizza like this, after 3 rounds of it, there isn't much being soaked up - I get more of the sauce than I do the fat. Do note that in this video, I'm using 2 paper towels together. Subsequent dabs use only 1 paper towel. The grease definitely soaks through the first one very well and even gets quite a ways into the second one on top."

Posted by Lauren Vincelli at 8:10 PM No comments: Links to this post

If you love pizza, set it free. 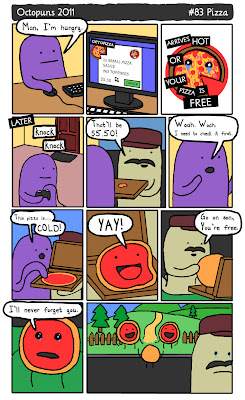 Posted by Lauren Vincelli at 5:56 PM No comments: Links to this post

Do you degrease your pizza?

Do you TIP your pizza delivery driver?

Google Analytics is watchin' you